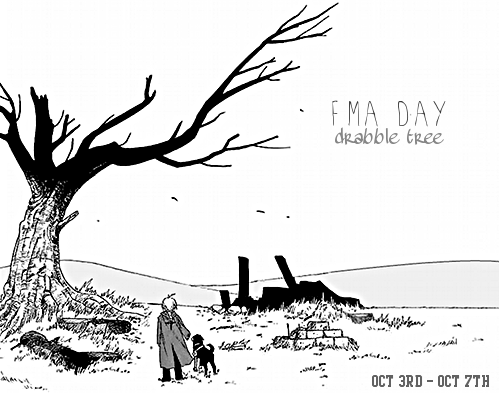 muir_wolf)
How this works: below is a drabble. To participate, reply to this post with another drabble (or small ficclet, we won't count the words) containing a sentence or phrase from the original. Please leave the words you took on the first line, as well as the characters/pairing/rating/tw. The next person continues the trend, taking a sentence or phrase from any of the existing drabbles and creating their own.
You can draw from any drabble as many times as you want. It's okay to change the tense or the POV of the bit you've taken if you need to for it to make sense !
The tree will be up till the end of Sunday - once it's close, you can comment all the way you want (the tree would be a bit difficult to read with comments in the middle of it)

The only constant about those birthdays is that neither of them is here.
Last year, they were both in Central and today - Alphonse is with Mei so she doesn’t have to worry at all, especially when she received a long letter from them. As for Ed, he’s somewhere in the West, that’s for sure - but she’s used not to have any news from him and, to be fair, the contrary would be quite scary.
She doesn’t mind - worrying about them at this point would be ridiculous. With so many patients to take care of, it would be a full time job she just couldn’t afford. But she allows herself an hour to climb the familiar hill and leave flowers among the remains of a burnt house being slowly reclaimed by grass.