Fanart and Fanfic: About Roy's Gloves

I just finished another watercolor piece, this time with Roy. Nothing to see here. ^___^ 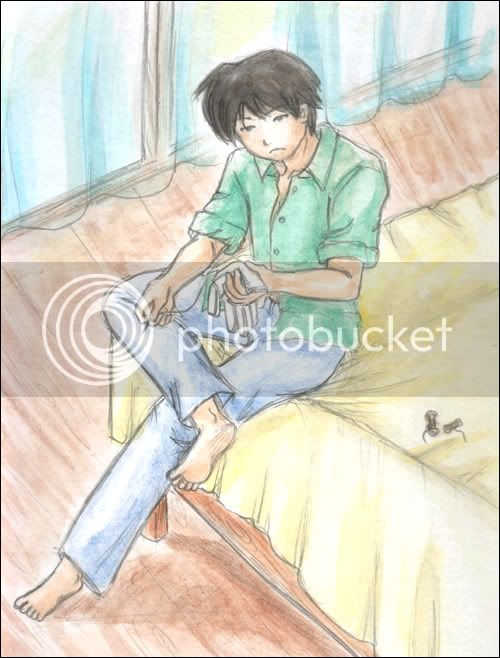 And I wrote a (crappy) fic associated with the pic. Born from lots of coffee and the heat wave. This is my first FMA fanfic.


He remembered what it was like when he was a young and ambitious soldier, fresh
out of military school. Already being a State Alchemist beforehand, his mother
used to sew his flint gloves for him.

His first pair belonged to once to his father. His mother painstakingly drew the
array on the backs of the gloves. He then infused the flint powder into the
fabric. He was very proud of them. So was his mother. She just adjusted his
collar and told him what a striking man he had become. She also said, it was too
bad his father didn't live long enough to see him enlisted in the military. He
grinned widely at her and promised to keep them forever.

They were destroyed barely two months later. In Ishbal.

When he returned home, Roy was devastated when he found out that his mother was
dying of the consumption.

He buried his father's gloves with her.

Roy bought dozens of pairs from the stores and infused them with the flint
particles. He then drew the flame array. But only it was only a matter of time
before he threw them all away.

They were made of wool. Whenever it rained, they shrunk. True, it allowed the
stone fragments to be retained. But he could no longer wear them.

He tried the cotton gloves. They soon joined the old ones in the trash bin. They
didn't shrink for a change, and were comfortable even when soaked.

He had nearly been killed. In the middle of a battle during a spring shower, he
realized in horror that the flint particles were easily washed away, rendering
the array useless.

Luckily for Roy, he was rescued by Hughes, someone from intelligence. The other
man was skillful with his knives, and had held the attackers at bay; giving
enough time for escape.

He had to resort to drastic measures. Buying bolts of synthetic fiber, he
successfully bound the flint into the fibers. And to his delight, subsequent
testing proved that his newly created flint cloth was easy to dry when they got
wet. Best of all, they didn't shrink either.

However, what he created was cloth. Raw material. He needed a skilled tailor to
make them into gloves. But it was suicide to entrust someone else with them. He
was quickly rising among the ranks, gaining many enemies in the process and he
couldn't afford to be dependant on someone who might as well be in league with
those who hated him. He then decided that he had to make them himself. But there
was one problem.

Roy Mustang could not sew.

He had briefly considered asking his assistant, Lisa Hawkeye to teach him how
to.

She would have shot his brains out for even implying that she was the motherly
type.

He proceeded to humiliate himself by begging Gracia Hughes to teach him; with
Maes Hughes snickering in the background. Giggling, she proceeded to do so. Roy
first learned how to stitch. Running stitch, backhand stitch... even embroidery.
He learned to control his temper and resist stabbing his best friend with the
delicate silver needles. Gracia taught him how to measure his hands, cut the
basic patterns, to estimate the margins and to finally sew the seams together.
He was a fast learner. Because of this...

He kept stabbing his index finger with the needles.

Hughes wondered how that was humanly possible even when said index finger was
protected with a thimble.

He hated the fact that he had to rely more often on his right hand when he
practiced "blowing up poor maltreated inanimate objects," as Hughes bluntly
said. And even more humiliating to note that he couldn't properly snap the
fingers of his left hand due to the multiple stabbings.

Roy got his revenge by making Hughes run around the parade grounds. It was so
much fun to see his so-called "best friend" trying to avoid the explosions.

The gloves were uncomfortable. He remedied that by coating only the outside. But
that did not stop the microscopic granules from slipping inside the inner layers
and chafing his skin.

Oftentimes, his hands were rubbed raw until he added a second protective layer
against abrasions.

That only made it harder for him to stitch the cloth pieces together.

Did he already mention that he loathed sewing?

Until one day, he walked into Fullmetal's dorm room. He caught his young charge
repairing his coat with neat, precise stitches.

He remembered finding himself asking why the Fullmetal Alchemist would be the
one to patch his own clothes. After all, there were perfectly good tailors in
East City.

The blonde boy glared at him. And grudgingly told him that their teacher had
made them learn. Besides, it was cheaper to do so.

Why? He asked. Wouldn't it be better to use alchemy to reconnect the cloth
fibers?

Fullmetal admitted that it was. But it wouldn't be the same, he argued. The
clothes didn't hang right. Tailoring wasn't in the realm of science. It took
skill and talent to be able to create clothes.

Roy also remembered praising Fullmetal's teacher for teaching him how to sew.

It was necessary, Fullmetal said while tying off the last thread. Al in his
current state couldn't stitch well. The armor's hands were too big and awkward.
Even years of getting used to the hollow shell doesn't allow for the refined
movements that only human muscles could create.

Roy then asked if the clothes Fullmetal was wearing were hand-made?

No. They were store bought, and repaired if damage was minimal. Then if it was
necessary, he would buy again.

But then, what use was the lesson their teacher taught them? He then asked the
boy.

Fullmetal looked up, and suddenly he wasn't the tough teenager Roy was looking
at anymore. Fullmetal, looked... childlike and vulnerable all of a sudden.

It was very useful. Fullmetal assured him.

"I had lots of practice sewing up my own wounds."

His memories of what happened after were a blur. Roy then found himself in his own
bed, in his own apartment.

He looked at the gloves lying on his dresser. He stood and examined then
carefully for any seams missing.

Even if he hated to sew, it was necessary. Sewing his gloves could save a lot of
lives. With his abilities, he could change the military and free the people from
further oppression.

And it was the same way Roy did it because he was the only one who could.

Spying a rip, he pulled out a needle and a spool of thread.

There. Good as new.

Maybe he didn't hate sewing as much as he used to. However...

Roy Mustang would rather die than admit that it was all thanks to Edward Elric.