Link to my Livejournal:

Title: The Phoney War, Chapter Five: Inbetween Days
Setting: Fullmetal Alchemist, mangaverse, post-series, slight ending AU.
Characters: Roy/Ed, Havoc/Rebecca, Riza/Miles, Al, Winry, ensemble.
Rating: R for naughty
Word count: 4547
Summary: Two years on from the Promised Day. Amestris is without a Fuhrer, the military is teetering on the brink of civil war, and Team Mustang search urgently for the opposition's secret alchemical weapon. Any day now could be the first day of the war, and everyone is feeling the pressure. So is it any wonder that Ed and Roy's growing friendship just kindasorta combusted on them?
Notes: Direct sequel to No Small Injury. Illustrated by me, betaed and edited by

Title: The Phoney War, Interlude: Test Drive
Setting: Fullmetal Alchemist, mangaverse, post-series, slight ending AU.
Characters: Roy/Ed
Rating: NC-17 for sexing
Word count: 2814
Summary: he half-wondered if they were going to end up in the bedroom, or if Mustang was leading him to a less sexy room in order to tell him he'd had second thoughts about the whole idiot idea.
Notes: You really don't have to know much about the plot of The Phoney War to get the uh, 'plot' of this piece.

So, here they were, then.

“Why do they have to fight?” Winry asked Alphonse as the two of them crouched on their hind legs like panthers prepared to prowl and pounce upon their enemies, breathing in deeply, as though the air might dissipate the moment someone moved.

She liked to imagine Alphonse with a wistful smile, and knowing, honey-brown eyes. “It’s the way they communicate. They’re more alike than they’d like to admit aloud.”

The FMA Slashfest is currently underway, celebrating all things slash and femmeslash in the FMA series. Please come check us out! 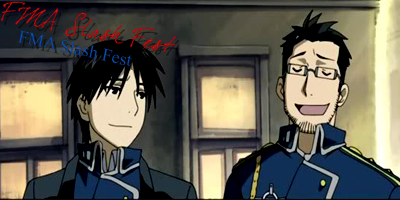 We've got lots of things going on right now. At the Prompt Claiming Post, authors and artists alike may lay claim to some of the many prompts available.

At the Recommendation Post, we are collecting a list of existing works so that everyone can go back and enjoy what's already been drawn and written (all yaoi and yuri pairings in any of the FMA series). Please stop by and add your picks!
Collapse